Before I get into this lovely tea, yay for light boxes! I was going to list this yesterday, and what happened? Well the clouds decided to make it super dark out ALL DAY. Which isn’t very long seeing as I’m in the Northern Hemisphere! So I broke down and finally made a light box… which admittedly took like 5 minutes to build… yep.

So here is Forseti’s Tea! When deciding what ingredients to blend for Him, I thought of what kind of mood I would need to be in to make decisions, to use good judgement  in my life whether it’s deciding career moves, or mediating between people, or anything else that has many sides to the problem that needs to be factored in so that I can make the best decision for all involved.
And this tea was created.

Chamomile to calm the mind, though not quite enough to make one sleepy! Lemon and lemon balm provide a boost to get your thinker a thinking, whilst lavender and fennel allow purity and clarity of mind. It’s quite a lovely, gentle tea.

If you are looking for another Deity’s tea, check out my Devotional Teas section.

A warm and spicy blend for the Skald Himself.

This is how I imagine poetry tastes like, sweet, slightly spicy, and warming.

Offer this to Bragi, share a cup with Him, or simply enjoy as you peruse a book of poetry. Also a fortification whilst writing your own stories or songs!

Have a look at Bragi’s devotional tea, or check out my other devotional teas. I’m currently fleshing out Northern Gods, but definitely have plans for a few other region’s Gods in the future!

And of course, my fantastical teas, which will be based on delicious foods and drinks to be found in fantastical stories. Currently, there is only Butterbeer, but I am working on Turkish Delight (no worries, I won’t be putting any evil magick inside the tea, compelling you to betray your siblings most horribly 😉 ).

Like a walk through the orchard. The bees are buzzing in the flowers nearby, and fresh apples are enjoyed beneath the old trees. Slightly spiced, and oh so sweet.

Inspired and imbued with the sweet Orchard Keeper’s energies, this tea is a lovely way to relax outside, or dream of the ease of summer! Enjoy this tea as you contemplate what delicious apple goodies you’re going to be making, share a cup with Idunn, or simply offer it up to Her. Can certainly be enjoyed without any other purpose than enjoyment too!

You’ll find the listing here, and you can check out the storefront here for other delicious teas!

A delicious, cider-like tea for sharing with your Disir, or to warm up after the cold outside.

The honeybush and apple really compliment each other, bringing out the fruit flavours of both, whilst still lending that honey-like flavour of the honeybush to the tea.
With this, cinnamon and ginger bring a sweet, warm deepness to the cup.

Cozy up with a good book and your family as you sip this tea that reminds us of home, and the women who provided home for us.

You can find Mother’s Night tea in my shop, The Forest Witch.

A yummy tea for the God of Thunder!
Black tea, peppermint, spearmint and Belgian milk chocolate steep together to make a delicious tea to share with Thor.

Black tea and chocolate provide a sweet, earthy, and warm base for the mints to float upon, reminding you of that storm on the horizon.

Have a looksee at Thor’s tea, or browse more devotional teas here!

A yummy, hearty tea for the Vanic Lord.

Dates, oats and allspice all on a delicious black tea bed.

I love the way that the oats lend a creamy and full mouth feel to it! This is definitely a good tea to keep you warm come the winter months.

You can check out Freyr’s tea here, and if you’d like to have a look around what other Deity teas I offer, just head on into my shop!

I want to introduce you to my new products I’m offering in my shop now!! As of now, there are only the two up; I was going to wait until I could get up a goodly amount… but I’m just too damn impatient to wait!! I just want to share them with you!

I’m making tea inspired by and for our Gods, as well as whatever tickles my fancy (seasonal/holidays/pop culture paganism/stories).

The Deity teas are meant to be shared with your Gods, simply offered to them, or just to enjoy as you think on Their many adventures and lessons.

This Baldr tea is a delicious chamomile base, with orange, lavender and allspice. It’s like walking in a summer meadow. 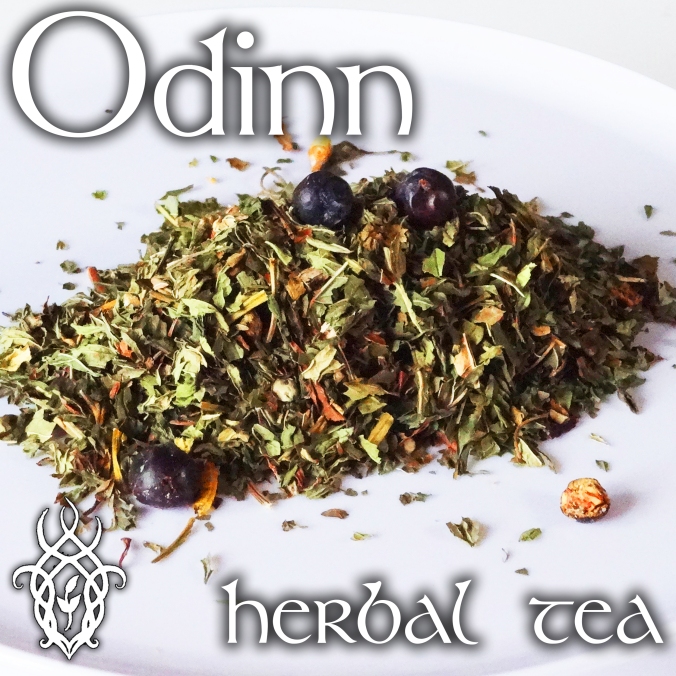 And an Odinn tea! Minty, spicy, and earthy. It’s like a cool walk on blustery cliffs as you sip on a thermos full of hot tea. A blend of peppermint, spearmint, juniper berries and white pepper.

I was meant to have a Frigg tea up as well, but I ran out of dehydrated apples, so am waiting on them to be finished drying at the moment.
My plans are to flesh out the Norse side of things, as well as some for holidays (and by that, I do mean Yule right now, but there will be teas for the other Sabbats), witchier teas for divining or journeying to Otherworlds, and teas inspired by fantastical worlds from books and movies. There will be some pop culture pagan themed teas to be had as well as our historical Gods/myths.

I’m so excited! I hope you are too, and keep an eye out on my shop for more tea!!!

Ok, so here it is! I’m going to be doing the meme that Beth and Nono are doing for Odin and Loki, and just as an overview, here are the questions of that meme:

And now for an introduction to Who Baldr is!

Baldr is widely known as the slain God. Light, and pure, and full of goodness, written lore has left us with a few versions of His death. Either Loki tricked Hodr, Baldr’s blind brother, into shooting mistletoe at Baldr and killing him; or in Saxo’s version, Baldr was merely demi-god, and was defeated by Hodr (also mortal in this version, and not the brother of Baldr) in battle over the hand of Nanna.

Unfortunately there isn’t much more written about Him outside of His death. There  is the Merseburg Incantations, or charms, however, which mentions Baldr, also referred to as Phol in the charm:

Like bone-sprain, so blood-sprain, so joint-sprain:
Bone to bone,
Blood to blood,
Joints to joints,
So may they be mended.

And that’s pretty much it as far as written lore about Baldr goes. It’s unfortunate in a way because I wish we had written lore about all the Gods, even local land wights that were worshipped before we discovered the Gods. Alas, that is not the case.
The other way I see this, however, is that it provides me with a fresh perspective of mostly my own, without a million opinions and misinterpretations of His history and Who He is (well, if we’re talking lore, Who He was about a thousand years ago, since worship was no longer happening widespread for far too long).

So while I don’t have overly much to write about Him here, I kind of get to be introduced to many of the things that aren’t known about Him as o/Our relationship progresses. It is exciting 🙂 Along with this, is the fact that it doesn’t seem that many people are involved with Him, or at least nothing I can really find much of online. It’s interesting, to say the least.

But back on topic, other than this, I don’t have much to add here. I wrote about how He is with me the other day, and only time will show me what kind of Person He is as we unfold to each other.

When contemplating this post, I wasn’t really sure what sort of beginning I should write about with Baldr, o/Our beginning, His beginning in Asgard, or perhaps even His new life in Hel after His death.

As His Father’s Son, He very much has a sense of exploration, of seeking, adventure, intrigue; of finding new places, people. As a Prince of Asgard, being groomed in diplomatic relations (though as any young Prince, likely found Himself in trouble a time or two when bravado trumped wisdom).

Yet, that’s not what I want to talk about.

We’ve already talked about His and my beginning, so that’s no good here either.

He began His new life, cut off from His family when He died. Sent to Hel’s realm. And where some might think this was just the end of what He was, that He just hangs around Hel’s halls all day long, I very much believe He’s still off adventuring in the realm of the Dead.

And still, this is not what I want to talk about.
I want to talk about Baldr Himself, not His stories, His history, what His future could be. Baldr Himself is the essence of beginnings. He is very much light, like sunshine, nourishing seeds to push past the dirt covering them to bask in His rays. His personality, His presence very much supports you, warm and light as you embark on your own adventures. He urges you to find beauty in the world around you, which allows you to rediscover where you are again.
His energy is hopeful and encourages you to see the silver lining, to follow that light back into the sunshine.

“I am the beginning at the end.
I flourish where darkness lies
For my light shines, still.
Ever outwards,
For light never stops moving.”

And that’s what Baldr wanted to say.